The MRU Maker Studio is a creative space for students, faculty, staff and community users to explore ideas and concepts. Come in and experiment with new equipment, tools, and software to approach projects in a hands-on way. Users can design and produce creations for research, class assignments, teaching, or personal projects.

We can work with you to explore opportunities for collaboration to achieve deep learning outcomes in creative ways.

Teaching and active learning in classrooms, Maker Studio or other locations.

Any of our existing workshops customized for your class by our Maker Studio experts.

Workshops to choose from that can be modified to align with assignments.

Integrate the Maker Studio into your course

In an effort to align with guidelines from Alberta Health Services and Mount Royal University, all workshops will be delivered virtually.

Orientations in the Maker Studio

Software Workshops in the Maker Studio 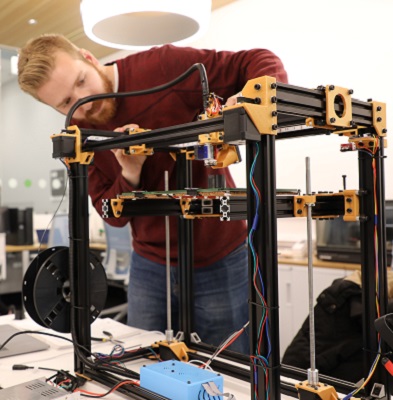 It’s the ultimate hack: Stian French used a 3D printer in the Maker Studio at Mount Royal University to make a 3D printer. The third-year Bachelor of Science ― Health Science student based his printer on an open-source concept he found during extensive online research.

"I could have bought the parts, but they were expensive and I knew they weren’t expensive to make. Plastic is pretty cheap, but it takes a lot of time to print all of them,” says French, 26, who was pleased to have found a publicly accessible design. “The Maker Studio saying they would print the parts was the catalyst I needed because I had already gotten all of the metal and electrical parts of the printer. The structural pieces printed here brought it all together.”

Kerry Harmer, the Maker Studio specialist, supports students, faculty, staff and the community in their endeavours in the University Library space. “On average, users spend two to four hours at a time in the studio. Students will come in and do a personal project on the 3D printer and then they’ll integrate that into their curriculum because they’ve built the confidence around the tool and the technology. The skills that students walk out of here with are immense,” Harmer says. “That’s why it’s really important to allow people like Stian to come in and use the space (without a requirement that it be tied to a course). As he’s learning 3D-modelling and understanding his 3D printer, it’s quite possible that for a capstone project in his fourth year, he will be printing 3D prosthetics.”

French, who plans on attending attending medical school to become an oral surgeon after graduating from Mount Royal, has just gotten started on his journey with the technology.

Excerpt from article written by Ruth Myles, published on mru.ca

Business students use assignment to think outside the box 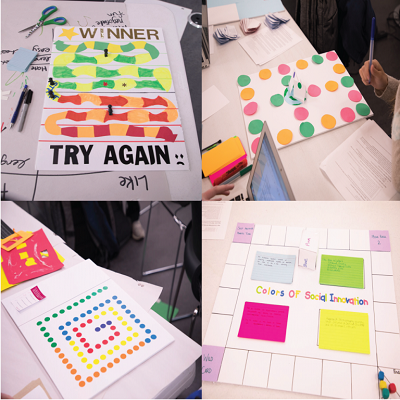 Catherine Pearl, a professor with the Bissett School of Business, not only encourages her students to step away from the classroom to find real world application on everything they learn in her course, she makes it mandatory and incorporates it into their final grade.

Felt markers, stickers, colourful paper, and glue sticks could be found on tables in the Maker Studio as Introduction to Social Innovation (SINV 2201) students spent the day completing their final class project—designing a board game based on elements they learned in the accelerated block week course from May 3-10.

The students, who varied from first to third year, were divided into groups where they discussed their favourite traditional board games and how they could incorporate those same elements into specific subject areas they learned from course material throughout the week. A large portion of the afternoon was spent bringing their plan and design to life. The day ended with a presentation by each group that had them explain the concept of their game and how it relates back to the course content.

Pearl got the idea from a Telus Spark professional development course she took with educators from around the city of Calgary where they were tasked with a similar project. She noticed the level of engagement from participants and decided that a social innovation game would be a great way to challenge her students to think outside the box. 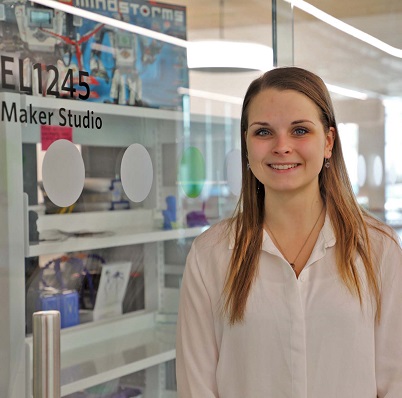 Broadcast Media Studies student Katelyn White used her reporter instincts to pursue a news story that featured the Maker Studio. The fourth year student was challenged to develop, write, and produce a news story as part of a final assignment in her Multimedia Content Production course. White was interested in 3D printing, specifically the ways in which this relatively new technology is used to support teaching and innovative scholarship at universities. Several hours of footage shooting 3D printers in action, as well as interviews with Maker Studio Specialist Kerry Harmer and select faculty and students who have made use of the printers lead to an article published on cmru.ca, as well as a video news story. 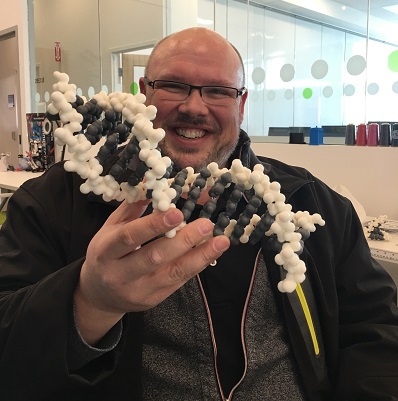 Lars Petersen believes in a hands on approach to teaching. The Biology instructor used the 3D printers in the Maker Studio to create two DNA models that help his students to understand genetics. One model is used as a teaching aid during his class lectures and the other breaks off into magnetized detachable pieces students use to work in groups and determine how to build the DNA helix. Petersen has said that even his own understanding of the appearance and functionality of DNA has been enhanced by playing with the models that took almost 6 months to complete. 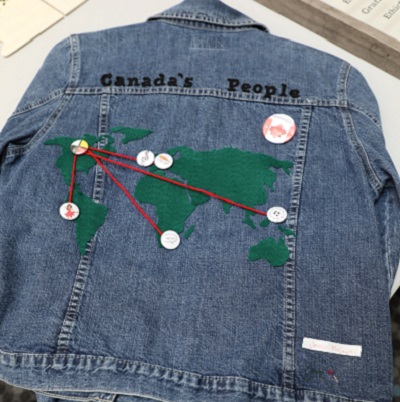 The Library Atrium and Ideas Lounge on the main floor was transformed into an art exhibit on October 16, 2018 with the EDUC 4107 project showcase. Students were tasked with taking Social Studies curriculum to create a project with tools available in the Maker Studio, which helped them communicate what they identified as the most important elements of the content. The finished products incorporated laser cutting, etching, sewing, painting, 3d printing - just to name a few.

Most students had little to no experience with the Maker tools and ended up with very impressive results. Both faculty and students are encouraged to stop by the Maker Studio if they have a special project in mind. 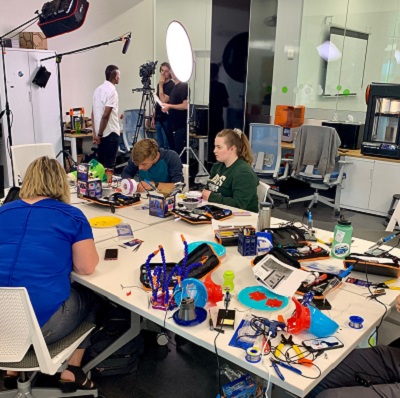 Makers Making Change is an innovative community based initiative that connects makers to people with disabilities to create affordable open source assistive technologies. The organization collaborated with Maker Studio specialists to host a hackathon and buildathon that invited members of the public to create 3D printable accessible light switches and hack toys to make them more accessible to children with disabilities.

This partnership was one of many that encouraged members of the Calgary community to come and visit the Maker Studio and learn about resources that are open to the public. It also allowed the MRU makerspace to contribute to the important work of using the ever expanding world of tech to advocate and be inclusive.